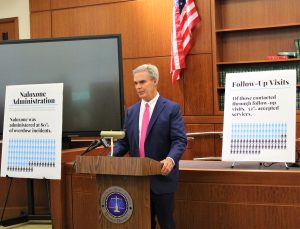 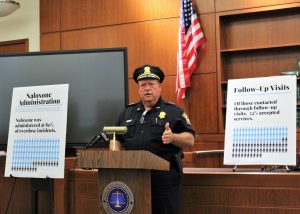 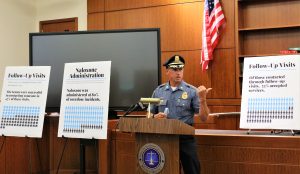 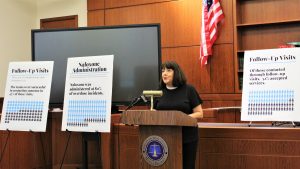 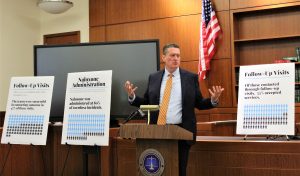 WORCESTER – More than half of those offered services following an overdose accepted treatment as part of a program launched last year by District Attorney Joseph D. Early Jr. and all 60 police departments in Worcester County.

Critical Incident Management System (CIMS) launched in March 2020 and was used by police departments in all of Worcester County’s cities and towns over the last year to collect overdose data and respond to non-fatal overdose victims to offer services. The response visits were performed with a plainclothes police officer and a recovery coach usually within 48 hours of an overdose incident.

Data from the last year shows that on 52 percent of the follow-up visits, individuals accepted services. In another 9 percent of instances the individuals were already seeking services.

“These are encouraging numbers,” said Mr. Early in a press conference today. “It was a challenging year to launch this program with the roadblocks presented by the COVID-19 pandemic. These numbers are a promising start. Any time we can help even one person get access to treatment is a life that is being saved.”

“By getting the names of the folks who’ve had the non-fatal overdoses and by giving the opportunity for the follow up…what you’ve done is open the door. You’ve made the connection. You’ve provided an opportunity for that person when they’re ready to take advantage of the treatment options that are available to them,” said Worcester City Manager Edward Augustus Jr.

CIMS allows police departments to share information, as well, so that when a person overdoses outside of their hometown they are still receiving a follow up visit.

“Addiction has no jurisdictional boundaries,” said Fitchburg Police Chief Ernest Martineau, former President of the Central Mass. Chiefs of Police Association. “When there’s no boundary for that, there can be no boundary for helping people. And that’s what this does. It connects 60 cities and towns police departments in responding and helping.”

“The beauty of CIMS coming on board is now we have a centralized database that’s tracking and we get an alert when we have to go offer up services. And the other thing that we were missing was when people were outside of Webster having an overdose, we never knew. Now with CIMS, we can follow up with them. It’s a really integral part of getting these people the help they need,” said Webster Police Chief Michael Shaw. Webster’s responses to those in need are assisted by a partnership with Opening the Word Recovery Center, run by Rev. Janice Ford, which opened in June 2020 and served more than 2,000 people.

In fall of 2020, the District Attorney’s office was awarded a $1.2 million grant from the federal Department of Justice-Bureau of Justice Assistance to fund recovery coaches that will respond with police to follow up and offer services after an overdose.