After working for the Hampden District Attorney’s office and for the Massachusetts Attorney General, Joseph D. Early, Jr. hung out his shingle and practiced law for 17 years, specializing in civil and criminal litigation. His varied experience struck a chord with voters and he was swept into office with 78 percent of the vote on November 7, 2006.

Mr. Early works with the law enforcement agencies in 60 communities that make up the Middle District. He oversees a law office of more than 80 prosecutors, the operation of 11 District Courts, Superior Court, Juvenile Court, three six-member jury sessions, the grand jury and an appeals division. 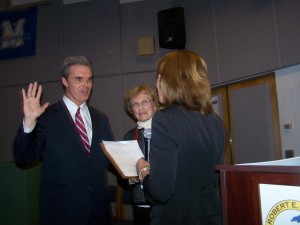 Before starting his private law practice, Mr. Early served as an Assistant District Attorney in Hampden County from 1985 to 1988. He then spent two years in the trial division of the state Attorney General’s Office. From 1990 until January of 2007, Mr. Early ran his own law office. During this time he also represented the commonwealth as a special assistant attorney general.

Mr. Early lives in Worcester with his wife Judy and their five children.