“Eyes Up, Phones Down Worcester” Launched to Address Distracted Driving and Pedestrian Safety 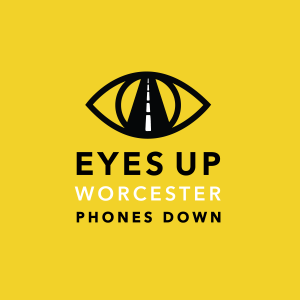 “We want to encourage people to make smart decisions on the road, including putting the phone down while driving, being alert while walking and taking care around others sharing the roadway,” said Worcester County District Attorney Joseph D. Early, Jr. “Taking the simple step to keep your eyes up and put your phones down will help make us all safer.”

Over the next year, these groups will work together to spread this message on social media, within the schools and by partnering with other businesses and organizations throughout the city of Worcester.

“Even with all the investments we’ve recently made in traffic safety, the best strategy we can promote is for all residents to remain alert while driving or walking,” said City Manager Edward M. Augustus Jr.  “We can’t stress enough how important it is for both drivers and pedestrians to constantly be aware of their surroundings. The City is proud to partner with the District Attorney’s Office, the Worcester Police Department, the Worcester Public Schools and the Safe Roads Alliance on this important public information campaign.”

The launch coincides with the implementation of the Massachusetts Hands-Free Driving Law, which police in Worcester and across the state will begin enforcing on Feb. 23.

“Our main measure of success will be compliance. I believe through enforcement and this education campaign that we can effectively reduce crashes caused by distracted driving and walking,” said Worcester Police Chief Steven M. Sargent.

The Worcester Police Crime Analysis Unit determined that in 2019 there were 267 pedestrian crashes in Worcester, five of which were fatal.

“Safe Roads Alliance is honored to partner with District Attorney Early and the City of Worcester on their Eyes Up campaign,” said Emily Stein, President of the Safe Roads Alliance. “We all need to be reminded about the importance of keeping our eyes and mind on the road. The new Hands-Free law starts in Massachusetts next week, and now everyone in Worcester will see this campaign and will hopefully remember to keep their Eyes Up while driving.”