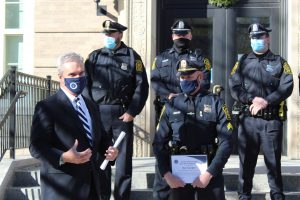 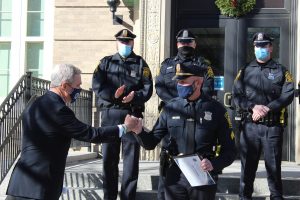 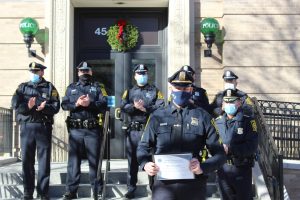 Sgt. Jon Kalagher, who saved a victim amidst a domestic violence incident, was presented with the District Attorney’s Team Excellence and Merit — TEAM — Award, which recognizes outstanding service by those in public safety.

While on duty, Kalagher responded to a domestic violence call in November of 2019. A man had repeatedly stabbed his wife inside their Windsor Ridge Drive apartment. The woman fled to a neighboring apartment where residents called 911. The man followed her to that apartment and then outside as he continued to attack her.

The attack was ongoing when Kalagher arrived. After issuing several commands to the man to drop the knife, Sgt. Jonathan Kalagher fired upon the suspect. The man was transported to the hospital where he was pronounced deceased.

The victim survived the incident, thanks to the Kalagher’s efforts.