Sgt. Robert Larochelle and Officers Jacek Ochocki, Jonathan Brooks, and Robert Rockwood were presented with the District Attorney’s Team Excellence and Merit – TEAM Award – for their efforts and actions during the May 2021 house fire.

“These officers worked swiftly to help a woman safely escape from a home as flames poured around the structure,” Mr. Early said. “Sadly, the woman’s husband who tried to rescue pets from the home died, but without the actions of these officers we could have lost another life.”

Sgt. Larochelle and Officers Ochocki, Brooks, and Rockwood arrived at the fire, which was reported around 9:40 p.m. on May 19, 2021, and found the home at 146 High St. engulfed in flames.

A handicapped woman was trapped on the roof of the front porch. Neighbors helped the officers locate a ladder and the officers were able to help the woman off the roof and to safety.

Donna Duvall, who lost her husband Paul Brian Duvall Sr., and their three cats, Baron O’Tossbald, Oreo Cookie and Queen Poohccahlawnnii, in the fire stressed the need for people to be cautious while disposing of smoking materials.

“The holidays are going to be the worst because my heart is broken,” Mrs. Duvall said. “I am devasted. My husband was my sight because I am legally blind. He would go and get my medication because I could not go out in the heat or cold. I lost everything we had.”

Fire investigators said the cause of the fire will remain officially undetermined but noted there was evidence of smoking materials and common combustibles in the area where the fire started. Officials said electrical wiring could not be ruled out as a possible cause as well.

Authorities said previously that improper disposal of smoking materials was the most probable cause of the fire.

“I am truly in awe of the actions taken by these officers that night. Their complete disregard for their own safety shows their commitment to protecting the residents to which they provide service,” Webster Police Chief Michael Shaw said. “They are a shining example for our profession, and I am honored to work side by side with them.”

Officer Ochocki becomes the first two-time recipient of the TEAM Award. The officer was honored last year, with three fellow officers, for rushing into a Robinson Street home on March 13, 2021 and helping occupants escape the flames.

“Through his actions, Officer Ochocki shows how much he cares for the people living in his town,” Mr. Early said. 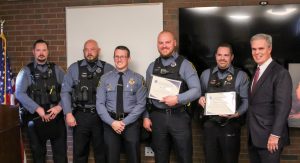