Just after 8:20 a.m. on July 17, 2022, Milford police received a call from their neighboring department, Hopedale police. They required help finding a missing resident who had not returned home and was last seen around 2 p.m. the previous day.

From the moment the call came in, officials worked together and diligently to find the 60-year-old man.

The first responders responsible for this coordinated search and rescue were presented with the District Attorney’s Team Excellence and Merit – TEAM Award on Thursday.

“When this call came in, there was one goal, and it was a goal shared across everyone involved; to find this man and get him back home to his family,” Mr. Early said. “It is only fitting this group of dedicated first-responders receive the TEAM Award because every aspect of this rescue and response embodied teamwork.”

Milford Sgt. Joseph Rizoli, and his entire shift, initiated an investigation as soon as the call came in from Hopedale police. Officers searched several locations in town.

Pings of the man’s cellphone placed him somewhere in the area of the quarries around Walden Woods and Interstate 495 in Milford. Officers on ATVs searched the woods, and the Drone Team from the Milford Police Department was dispatched to survey the area and hopefully locate the man’s Jeep.

Dispatchers from the region and members of the Massachusetts Fire District 14 Technical Rescue Team were all pivotal in helping search the area and relay information.

Authorities were able to contact a satellite radio service and obtain coordinates for the man’s vehicle.

Around 3:40 p.m. on July 17, 2022, searchers located the man’s Jeep, which was overturned. The man was trapped and hurt, but he was conscious and alert. He was freed and transported to an area hospital.

“I really appreciate the dedication of my officers, dispatchers and all of the first responders involved because none of them gave up that day,” Milford Police Chief James Falvey said. “The collective knowledge of all the rescuers helped find this man and save him.”

“I can’t stress enough the importance of teamwork,” Milford Fire Chief Mark Nelson said. “Our agencies work hand in hand every day. We appreciate the recognition. This rescue was the result of teamwork and coordination, the hallmarks of being a first responder.”

Hopkinton Fire Chief Bill Miller said, “It was a great feeling to find this man, injured but alive. It was an amazing group effort.”

The TEAM Award recipients are: 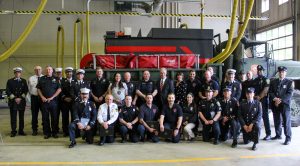 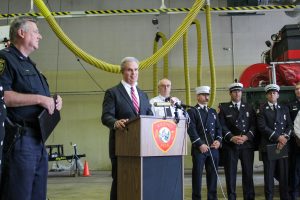