LUNENBURG – Worcester County District Attorney Joseph D. Early Jr. today recognized the life-saving actions of a Lunenburg Police Officer who saved a man being attacked by a dog this year.

Lunenburg Police Officer Gage Russell was presented with the District Attorney’s Team Excellence and Merit – TEAM Award – for his efforts and actions during a Aug. 1, 2022 incident.

“This officer arrived at a chaotic scene, but remained calm, assessed the situation quickly and took immediate action,” Mr. Early said. “Officer Russell saw the animal latched onto Wayne Comeau’s arm and knew the grave situation the victim was in.”

Lunenburg Police Officers and members of Lunenburg Fire & Rescue were called to 806 West St., the Animal Control Facility, on Aug. 1, 2022, for a report of a dog actively biting a 75-year-old man.

The victim was Wayne Comeau, the husband of the town’s Animal Control Officer Kathy Comeau.

Officer Russell entered the kennel and saw the dog still biting Mr. Comeau, who was struggling from his injuries. Officer Russell had to fatally shoot the dog in order to save Mr. Comeau’s life.

Mr. Comeau had serious bite wounds throughout his body, including his face and neck. He was flown to a Worcester hospital and was eventually released. He has since been recovering at home.

“Officer Russell’s quick response and actions saved Mr. Comeau’s life. I believe Wayne would not have survived the attack if Officer Russell did not intervene,” Chief Gammel said. “It was a fast and fluid scene where Officer Russell had to assess the situation quickly. Using his training, Officer Russell responded appropriately and professionally without hesitation and saved a life. We are proud to have him serve the town of Lunenburg.” 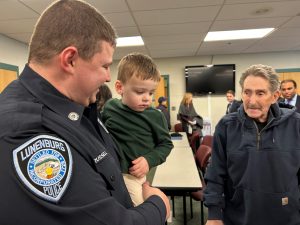 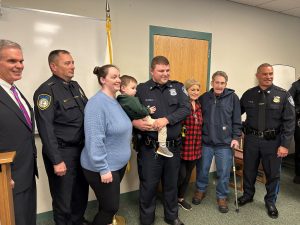 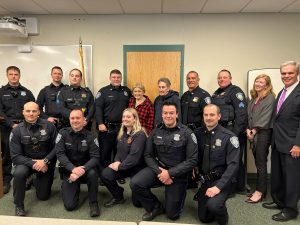