DOUGLAS – Worcester County District Attorney Joseph D. Early Jr. on Thursday recognized the life-saving actions of police officers, firefighters and a civilian who all worked together to save a man’s life who stopped breathing after he had been in a car crash.

Firefighter Ryan Norton, Douglas Firefighter Danica McCallum and civilian, Marc Rousseau, were presented with the District Attorney’s Team Excellence and Merit – TEAM Award – for their efforts and actions during the September 2022 crash.

“Again and again, we are seeing civilians team up with first responders when a life is in jeopardy,” Mr. Early said. “All of these officers, firefighters and the civilian worked in unison with the singular goal of saving a man’s life.”

Officers Branch and Foynes arrived on scene within minutes and saw a Jeep with minor head-on damage on the lawn nearby. The driver of the Jeep was not injured.

The second vehicle, a pickup truck, had veered off the road and into a handicap ramp attached to 94 North St. The truck had heavy front-end damage and the airbag deployed.

Marc Rousseau, a civilian, was trying to help the driver of the truck, a 76-year-old man from Hopedale. The situation was grave. The driver had a faint pulse but wasn’t breathing.

As Officer Branch prepared his medical equipment to help the driver breathe, Mr. Rousseau stated he could no longer feel a pulse. Officer Branch then began CPR on the 76-year-old man and continued for several minutes. Just moments before EMS arrived, the officer detected a pulse.

Douglas Fire Lt. Joe Overly and Firefighter Danica McCallum helped remove the driver from the pickup truck and continued life-saving measures on him. The driver was taken to an area hospital and his physical health improved.

“I would like to commend my fire personnel for their management of both a complex and dynamic incident scene and my EMS personnel for administrating life-saving medical treatment to a critically ill patient,” Douglas Fire Chief Kent Vinson said. “The bystander who helped at the scene and the police officers who performed CPR before firefighters arrived were a vital part of this incident.”

“Officer Branch and Officer Foynes are both outstanding police officers and the quick action they took that day to aid the victim was instrumental to his survival,” Douglas Police Chief Nick Miglionico said. “I must also praise Marc Rousseau, who was first on the scene to help prior to the officers arriving on scene. The Fire Department and EMS personnel did an excellent job providing advanced life support and because of this all-around team effort we had a very happy ending.” 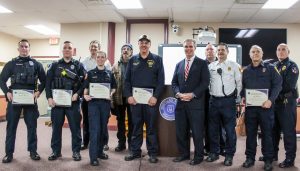 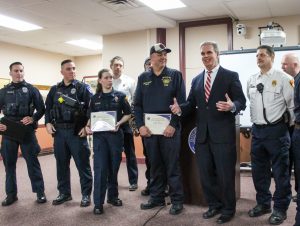