“All four of these people knew there was a woman in need of help. All four of these people decided to act, and saved a life,” Mr. Early said. “This is an excellent example of officers and civilians working together and going above and beyond what was expected in order to help someone in need. I am proud to honor these four individuals.”

It was around 5:45 p.m. on March 24, 2022, when the Dudley Fire Department and Dudley Police Department were dispatched at 19 Brandon Road for a structure fire.

Ms. Carter was at a nearby store when someone told her a building was on fire. She called 911 and ran to the Brandon Road dwelling. She began knocking on doors to help residents escape.

Officer Daniels was first to arrive and learned a woman was trapped in a second-floor apartment. Officer Bullock, who was off duty at the time, and a civilian, Anthony Fitzherbert, joined Officer Daniels and tried to reach the woman but the heavy smoke held them back.

The woman yelled for help from inside her burning apartment. Mr. Fitzherbert was able to get back inside the building and pulled the elderly woman out of her apartment. As he led her down some steps, Officer Bullock and Officer Daniels ran back inside and were able to carry the woman out.

Dudley firefighters and EMS arrived. The woman was treated and taken to an area hospital. Her injuries were not life-threatening.

“We’re very fortunate to have people in town who are willing to help out. If it wasn’t for the two officers, my call firefighter, and the civilian, I think lives would have been lost. Lives were saved because of their quick thinking and actions,” Dudley Fire Chief Dean Kochanowski said. “The conditions of the fire were very difficult that day. We pulled up to a very large volume of fire and it was a very hot and humid day. For people to go in with no protection on, even under regular circumstances it would have been amazing, but the conditions made it even harder for them. We’re appreciative that they risked their lives to save people.”

Mr. Fitzherbert was already in the process of working to become an on-call firefighter for the town of Dudley at the time of the fire and has since received that status.

“We’re very proud of the accomplishments of Officer Daniels and the others who participated in this rescue. It is one of those scenarios where you see a good outcome from people who were willing to put their lives on the line to save someone’s life, a person they didn’t know,” Dudley Police Chief Steven Wojnar said. “They were certainly willing to step up and help. Especially in today’s world, when there’s a lot of cynicism and trouble, it is good to see there are good people out there who are willing to sacrifice themselves for others.”

This isn’t the first time Officer Bullock saved a life while off duty. In 2019, the officer was in East Brookfield when a man accidentally cut his arm with a circular saw. Officer Bullock heard the man call for help, secured a tourniquet to the man’s upper arm and saved the man from possible life-threatening injuries. 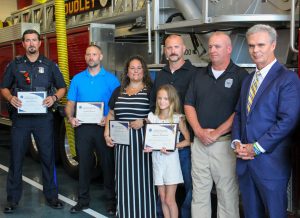 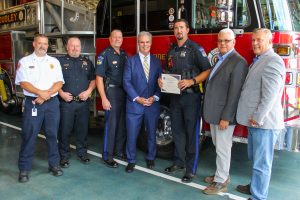 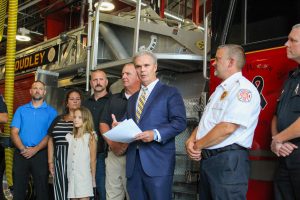