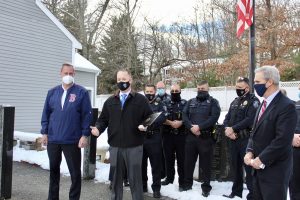 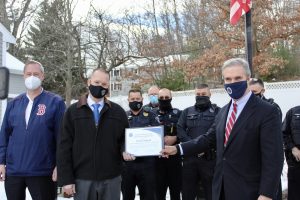 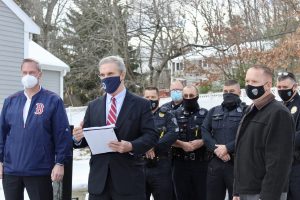 Detective Keith Chipman, who helped recover $65,000 for the victim of a scam, was presented with the District Attorney’s Team Excellence and Merit — TEAM — Award, which recognizes outstanding service by those in public safety.

“All too often, victims of scams will never see their money again,” Mr. Early said. “Det. Chipman’s diligent work and commitment on this case helped the victim restore some of her life savings.”

This July, Det. Chipman received a call from the family of a 78-year-old North Carolina woman who had been scammed out of about $160,000. The scammer used a military romance scam, a common scheme in which subjects use fake Facebook accounts to portray themselves as United States servicemen and target women online in an attempt to fraudulently solicit funds.

Despite the difficulty in locating and recovering funds in international scams, Det. Chipman persisted and was able to find a portion of the scammed funds, totaling $65,000, at a bank in Auburn.

In October, Greer Spatz, the chief prosecutor for the Worcester District Attorney Office’s Financial Crimes Unit, filed a motion seeking to return the funds to the victim. A judge allowed the motion in a ruling on Nov. 3.