The money is from the Drug Forfeiture Community Reinvestment program, which uses money seized from drug dealers as a crime prevention tool.

“The North Worcester County Drug Task Force is a great partnership between our local police departments to rid their communities of drugs,” Mr. Early said. “Stopping the sale of illicit drugs helps save lives and reduce other types of crime. I’m honored to support the task force’s ongoing work.”

“We appreciate these funds awarded from the District Attorney’s Office for the North Worcester County Drug Task Force. We are fighting an ongoing battle against the narcotic epidemic and we look forward to continuing our efforts,” said Lt. McAvene

“I want to thank the District Attorney for partnering with us on programs like this, helping our city and taking a negative situation and turning it into a positive one,” said Mayor Nicholson. 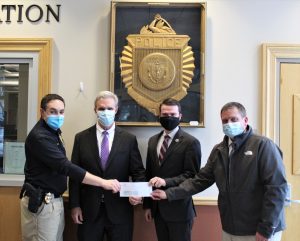