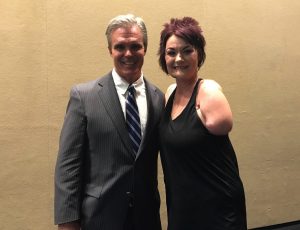 It is part of HYPEDD – Helping Youth Prevent and Educate Against Drunk Driving – a year-long initiative sponsored by the District Attorney’s Office and funded by a grant from the Drunk Driving Trust Fund administered by the Massachusetts Office for Victim Assistance.

Mr. Early said HYPEDD is an example of his emphasis on prevention.

“Imagine if your actions claimed the life of someone else – maybe your best friend in the car with you or an innocent person on the road,” Mr. Early said. “These are stories we hear far too often. I encourage you to work with me to help prevent these tragedies.”

About 120 students representing 16 schools and programs participated in today’s kickoff event at the DCU Center where they heard from Sarah Panzau, a former star volleyball player from near St. Louis who lost her left arm and nearly her life in a drunk driving crash 13 years ago.

Mike Marcy and Andy Lacombe of Charter Communications presented tips on making PSAs to the students.

The schools will submit their PSAs in the spring and prizes will be awarded for the best creations.