WORCESTER – Worcester County District Attorney Joseph D. Early Jr. is warning the public of a recent drug arrest in the county and the new overdose risk it poses.

In September and October, investigators worked in the Blackstone/Woonsocket area to address counterfeit pills. As a result, roughly 750 counterfeit Oxycodone tablets containing fentanyl, along with more than 100 grams of cocaine.

This investigation, which was a joint action by the State Police Detectives assigned to the Worcester County District Attorney’s Office with the Drug Enforcement Administration, the Blackstone Valley Drug Task Force, the State Police Tactical Diversion Squad, the Blackstone Police Department and the Woonsocket Police Department, resulted in one arrest on the charge of trafficking in fentanyl more than 10 grams, were seized.

“This recent arrest highlights one of the changes we’re seeing in the drug market in Worcester County and nationally,” Mr. Early said. “We want to warn people that the pills they buy on the street are often cut with fentanyl and can be just as likely, if not more, to result in a deadly overdose as heroin.”

In 2020, there were a record high 93,000 overdose deaths in the United States. According to experts, fentanyl is the driving force behind overdose death increases in recent years.

“I’m proud of the work our State Police Detective Unit and local police are doing to combat this influx of fentanyl and its distribution in all forms. It’s important that the public be aware and take caution with all different types of drugs,” Mr. Early said. 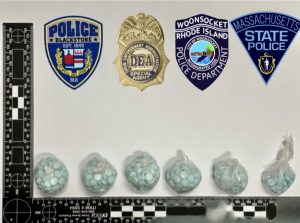