Fire Leads to Arrest on Drug and Gun Charges 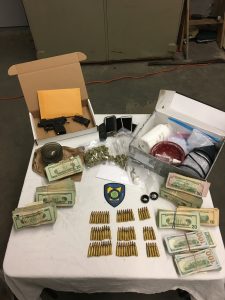 ​UXBRIDGE – An investigation into the cause of a Friday morning fire at a Douglas Street home, led to the arrest of a resident on drug and gun charges, according to Worcester County District Attorney Joseph D. Early Jr. and Uxbridge Police Chief Jeffrey A. Lourie.

​Lewis is scheduled for arraignment on the charges tomorrow in Uxbridge District Court.

​The initial fire investigation led firefighters to contact the Uxbridge Police, who applied for and received a search warrant for the residence. Among the items seized for evidence were a 9 mm handgun, 70 rounds of ammunition, more than 19 grams of cocaine, about 30 grams of marijuana, and $60,000 in cash.