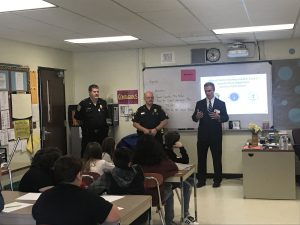 Worcester County District Attorney Joseph D. Early, Jr. presenting the first This Is (Not) About Drugs program to a class of sixth graders at Leicester Middle School.

LEICESTER – A new anti-drug program was presented this month for this first time in Worcester County at Leicester Middle School, according to Worcester County District Attorney Joseph D. Early Jr.

The program, including the short film “This is (Not) about Drugs,” was designed by Overdose Lifeline, Inc., and is presented by the Worcester County District Attorney’s Office in its prevention and intervention efforts.  The DA’s office partnered with the Town of Leicester and Leicester Police Department to win a grant from the state Attorney General’s Office to pay for it. The program informs students about the dangers of opioid abuse, misused pain medications and street drugs such as heroin.

The DA’s office outreach team made a series of presentations of the program to all the 6th Grade students at Leicester Middle School. The 7th and 8th graders will be the next audience.

“This is a program that works,” Mr. Early said. “We’re not in the schools to scare anyone, but to educate them about opioid abuse. We want the students to make good choices and empower them to think a little bit more about the dangers of opioids. We love partnering with Leicester on this.”

Leicester Police Chief James Hurley said he was impressed by the quality of the film and the presentation by Ellen Miller of the District Attorney’s outreach staff. Besides asking the students questions about drugs, Ms. Miller led a discussion about the impact these drugs have on people’s lives.

“We need to reach out to our children as early as possible and educate them about the dangers of opioids,” Chief Hurley said. “We can’t afford not to undertake this effort; we owe them the opportunity to avoid the opioid epidemic which they had no part in creating.”

“This is (Not) about Drugs” targets students in Grades 6-12 and is best presented in a classroom setting. The program is available for presentation through the District Attorney’s Office. Please call 508-755-8601.