“It is not just about knowing what to do, but being able to act under intense pressure,” Mr. Early said. “This emergency could have had a very different outcome, but thanks to the five hardworking individuals here today, this man can celebrate the holidays with his loved ones.”

On the morning of March 12, first responders were dispatched to the home of 41-year-old Alex Jones. Upon arrival they found Jones unresponsive and in cardiac arrest. Preforming life-saving CPR and Advanced Cardiac Life Support care, they were able to resuscitate Jones at the scene. He was able to make a full recovery.

“We are forever grateful,” said Jones, who attended the awards ceremony on Monday with his wife and two young sons.

“The Department has had other saves since March, but this one hit close to home for us all where the patient was so young and healthy prior to this incident,” said West Boylston Fire Chief Thomas Welsh. “These EMTs and police officers did not just give Alex his life back, they gave a young son his dad, an unborn baby the chance to meet his father, a wife her husband, parents across the globe their son and friends their friend back.” 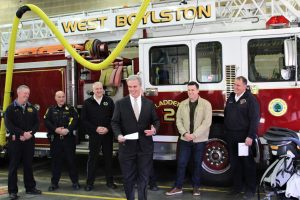 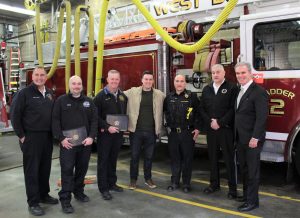 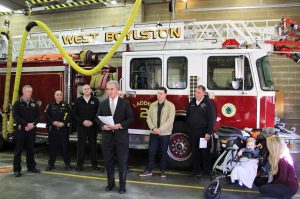