“A single cigarette sparked a fire that threatened multiple homes and lives,” Mr. Early said. “Despite having no protective gear, these four officers didn’t hesitate to rush into the buildings and ensure the safety of all residents. Lives surely would have been lost if it were not for their bravery.”

While on patrol at 4:42 a.m., Sgt. Reed reported a house fire on Robinson Street. The triple decker home was engulfed in flames. With high winds, the nearby home was in danger of catching fire. Acting quickly, Reed, Ochocki, Cedeno, and Motyka ran into both houses, waking and evacuating all occupants.

All residents made it to safety and the Webster, Dudley, Southbridge, Douglas and Sutton Fire Departments responded to combat the flames. 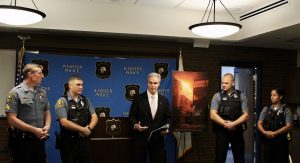 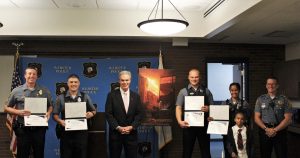