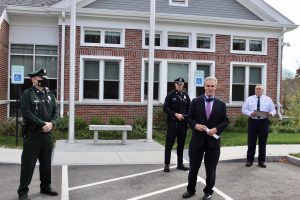 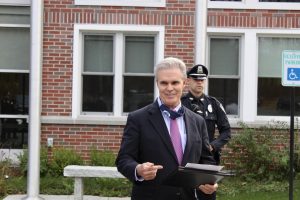 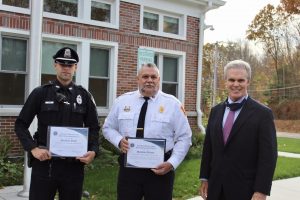 “I want to thank Officer Pepin and Chief Belsito for what they did this summer and for what they do every day to help others and make our communities safer,” Mr. Early said. “They are heroes and are what our award is all about.”

While off duty and relaxing on a Cape Cod beach on July 8, Chief Belsito and others in his party sprang into action after hearing about a father and son in distress and in danger of being swept out to sea.

Chief Belsito’s quick response led to the rescue of the frightened father and son, who were found clinging to an inner tube.

On July 22, Officer Pepin rescued a distressed man armed with a gun at Lake Manchaug. The officer’s actions were called “brave” and selfless” in a Sutton PD press release. Officer Spaulding assisted Officer Pepin in this incident.