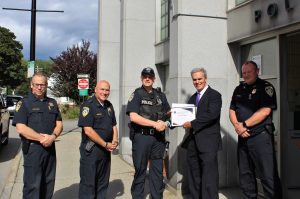 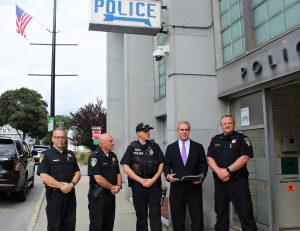 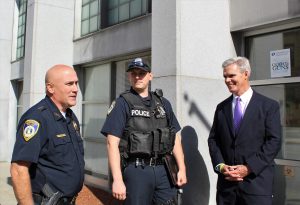 Officer Jonathan Benoit, who saved the life of runner Ronald Dorsey, was presented with the District Attorney’s Team Excellence and Merit — TEAM — Award, which recognizes outstanding service by those in public safety.

“In medical emergencies, seconds can mean the difference between life and death. Officer Benoit’s rapid response and training helped avid tragedy,” said Mr. Early. “In the height of the pandemic, he risked his health to ensure a citizen was saved.”

At 11am on April 12, 2020, Officer Benoit was on patrol as dispatch sent units to Doyle Field. Nearby, he responded, finding Ronald Dorsey suffering from cardiac arrest. Starting compressions, the officer preformed life-saving CPR until fellow first responders arrived.