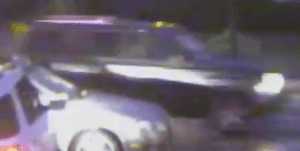 EAST BROOKFIELD – Information from the public is being sought about two vehicles of interest in a fatal hit-and-run crash on Sunday night, according to Worcester County District Attorney Joseph D. Early Jr.

State Police Detectives and the East Brookfield Police continue to investigate a crash that killed Lisa Germain of Worcester. She was crossing the street when she was struck by a passing vehicle traveling west on Route 9.

The crash occurred early Sunday evening on Route 9 in downtown East Brookfield near Dunny’s Tavern. Two vehicles, a sport utility vehicle and a pickup truck, were identified from surveillance videos along Route 9.

Investigators are asking for anyone who was traveling on Route 9 through East Brookfield at approximately 6 p.m. to call the State Police New Braintree Communications Center at 508-867-1170. Anonymous calls are accepted.  Investigators also request anyone who may be able to identify the vehicles shown in the accompanying photographs to contact that number.